We are taught from an early age to behave in certain ways, to please our parents and teachers at school through achieving high standards. And written into all of this, is the possibility and fear of failure: of not reaching those standards; in short, of not being good enough to those who matter to us, and look after us.

I have had two clients recently who were feeling overwhelmed by social media of one kind or another. One was finding it impossible to extricate herself from groups on Facebook, such as old schoolfriends, with whom she acknowledged she had never had much in common anyway, and the second who could not deal with the volume of WhatsApp messages she was receiving, often with long voice notes. Neither wanted to stop engaging, just to manage responses without alienating people.

Neither of these communication channels were attacking my clients, and yet that’s how it felt to them. My WhatsApp client reported freezing up when she saw a new message in her inbox. A typical reaction from someone whose stress levels are already high. But why should it be so when deep down we all want to feel connected to other people to some degree? We are inherently social beings after all. The motivation for being liked is knowing that others are there for us. So we are not left alone.

Let’s unpick how these feeling of overwhelm have arisen. We learn from our parents that it is rude not to reply to people if they are friendly and say nice things to us. We try to do the right thing as instructed from our childhood. Of course 30 years ago they could not have imagined the speed and volume of communication with which we live today. So, wonderful though it is in many ways, to avoid being overwhelmed and the feeling of not being up to the task, we now have to learn to edit.

It is impossible logistically to engage with everyone to the same degree. So, we have to decide who is the most important to us;  who and what messages we want to respond to in full. Rather than feeling under obligation to reply to each person who sends a message, it should be of our choosing. This is all about setting our personal boundaries and giving us back control of our lives.

We also have to ask ourselves, if I don’t react to that message, what will happen? That person may not send me another one. They may not like me anymore. Do I really care about that? It’s like the Wild West out there, things pass by quickly and are soon forgotten. Most of it doesn’t matter at all.

Alongside all this is a lack of self-confidence. Watch the bright expectant faces of young primary school children, brimming with confidence. As we get older life’s knocks tends to  dent this eternal optimism, but it’s still there inside us. We just need to polish it up by finding inside ourselves that special peaceful calm spot and being there more often.

The magic is that when you gently and positively erect some personal boundaries, other people usually respond in the small tone, and everyone is better for it. Try it. 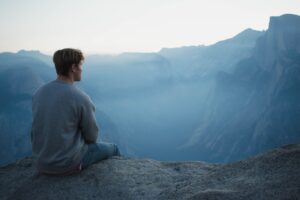