The French have a visceral relationship with food, and are probably the only nation who could make death and eating into a cinematic art form. La Grande Bouffe, directed by Marco Ferreri in 1973, tells the story of four friends who gather for the weekend in a remote house, expressly to eat themselves to death. A couple of decades later, Jeunet and Caro made Delicatessen, a black comedy about tenants in an apartment block, struggling to survive after some unspecified disaster. The landlord runs a butcher’s in the basement and lures victims to their death, selling the human flesh to his tenants. Truly macabre.

Most people are aware that setting up a restaurant is a precarious enterprise, even if they act against their better judgment, but perhaps starting a delicatessen is even more hazardous. The appeal of owning a shop stocked with beautiful bottles and jars, chilled counters displaying delicious cheeses is compelling and nostalgic. The financial reasoning is less appealing: the amount of stock required to make an impact on the walls is huge – £30,000 goes nowhere at all; it all has to be tracked and kept immaculate after the customers’ inspection. And the mark up is poor: 50% if you’re lucky, but usually 33%. However, if everybody was guided by accountants, no one would ever start anything.

Bill’s Produce Store, previously written about in Shelf Stacking has just opened in Covent Garden. This is the fourth member of a small chain, backed by the owners of Cote, and Richard Caring. What is so clever about this concept adapted to its much more expensive location, is that the deli part of the operation takes up no floor space. The high walls of the premises are lined with colourful jars, so beautifully co-ordinated, you would be forgiven for thinking they were just there for decoration. The floor is completely taken up with rustic tables, small and communal a la Pain Quotidien. The trick is that customers can gaze at the items on the shelves while consuming at the table, and then fill in an order form with items, which are just added to the bill.

In Liverpool, the feisty Candice Fonseca has just opened a second Delifonseca outlet on a site previously abandoned by Harry Ramsden’s. It is near the waterfront, abutting a small industrial park and highly visible from the main coastal throughfare out of the town centre. It is a large premises, but she has sensibly sublet part of this to an established Lancashire chain of butchers. In the absence of a Waitrose in Liverpool, this will be a welcome facility. With plenty of  parking space, Candice is hoping it will be a one-stop venue, for the more discerning Liverpudlians to stock up, while visiting the restaurant. 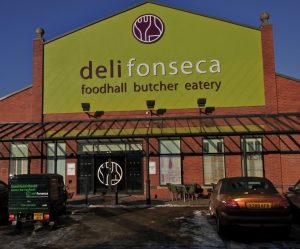 Despite the recession, independent producers have flourished judging by the increasing number of stands at London’s Fine Food Retailing exhibition. Whether they are redundant bankers trying out a change of career, or just responding to demand, they need outlets like Delifonseca and Bill’s through which to sell their wares. Napoleon said we are a nation of shopkeepers. Unlikely to have been meant as a compliment, but running a delicatessen is a whole lot more creative than death by overeating.

The ever reliable ever delicious quiche hits the s